Child marriage is an egregious violation of every child's right to reach her or his full potential. The Sustainable Development Goals (SDGs) enshrine a target to eliminate this practice by 2030.

The practice of child marriage has continued to decline around the world. Based on 2018 data available from each country, 21 per cent of young women (aged 20 to 24) were married as children. This represents a decrease from 25 per cent 10 years ago, driven predominantly by progress in India. This reduction also marks an acceleration of trends. An estimated 25 million child marriages have been prevented due to progress during the past decade. Of these, 7 million were expected based on the prior trends and 18 million were due to an acceleration of progress. Still approximately 650 million girls and women alive today were married before their 18th birthday. 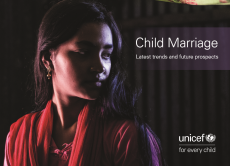