Continued learning for all Syrian children and youth

The present paper, prepared by NLG's education pillar, represents an update of the 2020 report on continued learning for all Syrian children and youth.

This annual report provides:
› An update on the situation of education for Syrian children in Syria and the five host countries;

› A section on the situation of Palestinian refugees in Syria and their access to education;

› Data on school-age Syrian refugee children in Syria and the five host countries;

The decade long war, aggravated by domestic economic decline and natural and other disasters in the region, continues to put tremendous stress on the overstretched education systems in both Syria and the host countries, impacting previous investments and progress made in the sector. Despite the continued efforts made by national governments and their partners, the number of out of school children in Syria and the five host countries remains high, estimated between 3.2 M and 3.6 M.

At least one third of Syria's children are not in school, deprived of education and other support needed to enable learning and development. Inside Syria, an estimated one in three schools cannot be used because they are damaged, destroyed, sheltering displaced families or used for military purposes. In neighbouring countries, nearly 800.000 Syrian refugee children are out of school. That is approximately one out of three Syrian refugee school-aged children.

The COVID-19 pandemic has exacerbated vulnerabilities and worsened inequalities among Syrian children. While online platforms and distance/home-based education interventions were launched across Syria and host countries, challenges including limited access to and high costs of internet connectivity and devices, restrictions in movement and access to basic services, has led to a digital divide posed and further excluded the most vulnerable children from accessing quality education opportunities. In addition, refugee families are more likely to be exposed to poverty jeopardizing their ability to prioritize education when trying to meet their basic needs. Moreover, the disruption of learning for children and prolonged school closures exposed children to increased protection risks, such as gender-based violence, domestic abuse, child marriage, child labour, and exploitation including cyber bullying and online safety.

In host countries, due to financial pressures and impoverishment, refugee families are often not able to prioritize education which may lead to disengagement of refugee school age population from the fulfillment of their right to education.

However, despite all those challenges, and owing to the generosity of host countries, donors and partners, and the unwavering commitment from teachers, parents/care givers and students themselves, over 5 million Syrian children are still learning inside and outside Syria, remotely, face-to-face or through blended approaches. 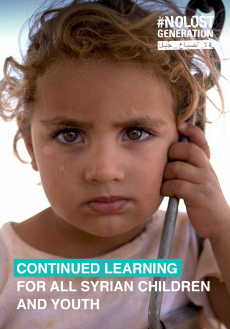