Expanding opportunities for the next generation: early childhood development in MENA

One of the most exciting developments in early childhood development (ECD) in the past 10 years has been the accumulation of evidence, from a number of disciplines, that investments in ECD significantly improve a child’s health, learning ability, future earnings, and life expectancy. Rigorous impact evaluations from Africa, Asia, Latin America, and the United States show that children who receive cognitive stimulation, nutrition supplements, and pre-primary education in their first 60 months lead healthier lives, stay in school longer, and earn more than children of similar socioeconomic backgrounds who did not receive these interventions.

Despite this compelling evidence, the Middle East and North Africa (MENA) region’s investment in early childhood development is among the lowest in the world. In 2011, gross enrollment in pre-primary education stood at 27 percent, half the world rate and below every other region except Sub-Saharan Africa. The shortfall is significant for at least two reasons. First, the region has invested heavily in the education of children aged 6 and above, with good results in terms of enrollment and completion rates. But learning outcomes have been disappointing.

This meticulously researched book attempts to bridge the gap between the current state of ECD in MENA and its potential. It does so by first documenting the status of very young children, the investments in their development, and the factors that would determine that investment, across MENA countries and in comparison with other countries. But the book goes further and conducts an individual analysis for 12 countries and territories that looks at their particular circumstances, extracts (for the first time, in some cases) the data on ECD efforts, and, critically, proposes a path forward to enhance the chances of improving the welfare of the next generation. 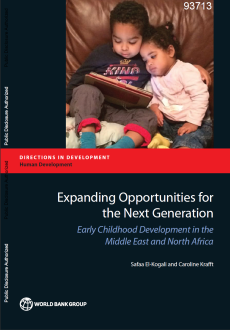