Around 57,000 people live in Al Hol camp in North East Syria, the vast majority of them are children. 50% of the camp’s population are under the age of 12. Originally established in 1991, Al Hol was reopened in 2016 when anti-ISIS operations began in Iraq, sending thousands of Iraqi civilians across the border into Syria in search of safety. From 2016 to 2018 there was an influx of Syrian internally displaced people (IDPs). During the final offensive against ISIS in Hajin and Baghouz in early 2019, the camp’s population skyrocketed from approximately 9,800 people to over 73,000 people.

While security incidents are not new in the camp, including attacks against security personnel, arson, escape attempts, and fights between residents, from April 2019 the security situation has significantly deteriorated, after the first recorded murder.

Since then, there have been at least 130 murders, including eight children, and 46 attacks/attempted murders. The pace of the murders increased substantially from September 2020 onwards. From April 2019- September 2020, there were 25 murders. Since then, there have been 106 murders, including at least 4 in 2022 alone. In 2021, this amounted to an average of more than two people killed per week and made Al Hol- per capita- one of the most dangerous places in the world. The overwhelming majority (98%) of these attacks have taken place in Al Hol’s Main Camp, home to Syrian and Iraqi men, women and children.

The pervasive insecurity has had a profound effect on children’s fundamental rights, their sense of safety, their psychological well-being, their education and their hopes for the future. Children have seen murders directly and hear and share graphic descriptions of other attacks. They worry that their siblings and especially their parents will be killed. Most are now forbidden from playing outside. Many of them have nightmares. Others have lost interest in going to school. These are pressures and fears that no child should have to carry. Their parents, deeply fearful themselves, struggle to manage their children’s reactions to this daily threat of violence and its aggregate impact on their behavior and their healthy development.

This report examines the impact that the violence has had on children’s lives- their experience and understanding of the violence; the impact on their mental health and well-being; and the measures that parents and children take to try to keep themselves safe. It concludes with a series of recommendations to provide support for children and their families. 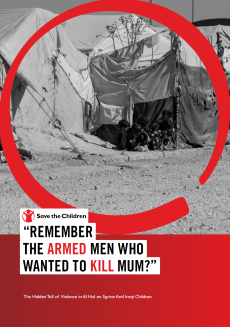 The hidden toll of violence in Al Hol on Syrian and Iraqi children (PDF, 1 MB)