#Syria10: Time to look ahead

A decade of violent conflict has pushed Syrian communities, both within and outside the country, to the brink.

Within the country, the number of people reliant on humanitarian assistance has almost doubled since the war began in 2011 with approximately 75% of the population in need today (13 million). Over 6 million people are internally displaced as a result of fleeing conflict and an additional 5 million refuges remain outside the country.

Estimates indicate half a million lives have been lost since the war began. Much of the country's infrastructure has been severely damaged or destroyed, including water networks, over half of public hospitals, one in three schools, and countless homes.

The COVID-19 pandemic has further exacerbated the already decimated economy, rising inflation and deteriorating Syrian pound - all of which have severely impacted the ability of households to purchase food and basic goods.

Ten years on, as millions of Syrians inside the country find themselves displaced, fleeing war and unable to access basics like food, shelter, water and sanitation, protection, basic health services or work, the need for sustainable early recovery and resilience solutions are more pressing than ever if the humanitarian response is to effectively restore dignity and self-reliance to the millions in need.

Whilst basic humanitarian assistance ensures lives are saved, applying a recovery and resilience lens is critical to ensuring people can access their rights, overcome aid dependence, and turn the dividends of humanitarian intervention into longer-term building blocks for sustainable livelihoods, income-generated opportunities, and the ability to cope with future shocks. Furthermore, the sustainable reintegration of displaced Syrians who chose to eventually return will depend largely on the availability of basic social infrastructure and services, a secure environment, and viable livelihood opportunities. 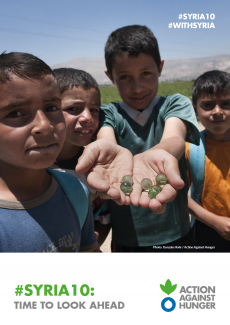