Too high a price to pay: the cost of conflict for Syria's children

This report, produced by World Vision International in partnership with Frontier Economics, shows the incredible loss of human capital in Syria as a result of a continuous cycle of grave violations against children, heavy economic costs and shattered opportunities for future generations and highlights that Syria’s children will ultimately bear the cost of conflict in Syria.

This report reveals the devastating economic cost of conflict for Syria, including the impact of violence and forced displacement resulting in limited access to education and healthcare, as well as dire psychosocial effects, on children. The scandalous cost of this conflict over the past decade equals $US 1.2 trillion in lost GDP. Even if the war ended today, by 2035 the economic repercussions of the war would equal an additional $1.4 trillion in today's money. That rises to up to nearly $1.7 trillion if we figure in that children whose education and healthcare have been negatively affected will contribute less to GDP once they are working adults.

These new economic findings have been further validated by a World Vision survey of nearly 400 Syrian adolescents and young adults in North West Syria, Lebanon and Jordan revealing the tremendous human costs of conflict. The burden of recovery after a protracted war is inevitably heaviest on those who were children, or were born, during it. By depriving children of education and by damaging their health, the war jeopardises the ability of Syria to recover. More importantly, the impact of war and violence on children’s psychosocial well-being is immense. Children and young people we spoke to are clear on what they want – an end to war in Syria. 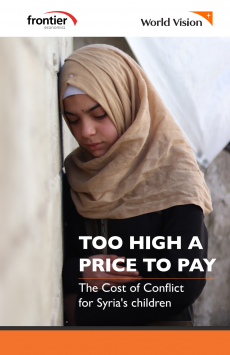